reading to our little ones

My mother read to us almost every night when we were children. When We Were Very Young and The House at Pooh Corner by A.A. Milne; A Child's Garden of Verses by Robert Louis Stevenson;  The Secret Garden by Frances Hodgson Burnett and The Story of Mr Prettimouse by Margaret Alleyne were particular favorites.  My siblings and I were enthralled by her readings - and we also loved our father's bedtime stories which followed a particular script - Goldilocks and the Three Bears and Mr. Garibaldi, a story he made up, about a garibaldi biscuit who got captured and eaten at the end, by me!

I made him tell his stories the same way every time. At the end of Goldilocks, she promised to restore the bear's home to order, and although the porridge was all gone, she told them that if they liked, she would make them some cornflakes! We children always joined in with the final words of this story, as our father told it.

I also remember early stories that troubled me - like Beatrix Potter's Tale of Samuel Whiskers or Roly Poly Pudding.  I'd turn the pages of that tiny book, knowing that a dreaded picture would soon be coming up.  It was the picture that showed Tom Kitten captured by a family of rats and rolled in pastry dough. They were making him into a pudding, so that his ears poked out at one end and his tale poked out at the other.

But the stories that resonated for me were not the same stories favored by my own kids.  My son Elliot particularly loved Beatrix Potter's Tale of Mrs Tiggy Winkle - which had made no impression on me as a child. It's about a hedgehog who takes in the neighborhood ironing.   She sings a little song as she irons - and as I sang it, Elliot would knock the headboard of his bed - like the visitor knocked on Mrs Tiggy Winkle's door, signalling for me to stop. Interrupted, I would ask, "Who's that?"  And Elliot went into peals of laughter.  We must have repeated this sequence half a dozen times each night.  I wonder what it did for him and why he loved it so?

My son Alex particularly loved The Stinky Cheese Man by Jon Scieszka - and Dr Seuss's The Lorax, while Rozzie's first favorite was The Cat In the Hat. She would imitate Sally at the end - striking Sally's pose after the shenanigans, when 'mother' returns from her shopping.  Rozzie also made me read what was for her a disturbing Beatrix Potter Tale Of Jemima Puddle Duck.   And now that I think about it, their favorite stories say a lot about them as they've grown up!

So it's delightful to watch my son Alex sharing books in the evening with his three month old son James.  His little boy is already growing up with a routine that involves a bath and a book.  He will become aware as he grows, of the rhythm of our beautiful spoken language and the joy of sharing books together.  It's a wonderful gift to the children in your life.  I'm so grateful my parents gave this gift to me.

Happy Christmas everybody!
Posted by byamandaholmes at 9:23 PM 2 comments:

What a bewitching figure was Edna St Vincent Millay -  known to her family simply as Vincent. I knew hardly anything about her when I picked up Nancy Mitford's biography Savage Beauty last week. But in 1938 she was one of the ten most famous women in America.  She lived near Great Barrington, Massachusetts, and although for several years we visited Great Barrington frequently while my daughter Rozzie was in college there, I never visited Millay's home, Steepletop, and never thought to.

But apart from her life, her manner, and her example I have now discovered her sonnets - and I can see how they gave a whole generation of women completely new ways of thinking about passion, sex and themselves.

So much has changed for women in the last one hundred years that you wonder what Edna St Vincent Millay can possibly say to us today.  But in reading about her,  I now understand that she was a bridge from Victorian notions of femininity to a modern understanding of female sexual empowerment.  I find myself identifying with her even more than with some of today's female role models.

Vincent Millay was never intimidated by authority.  At Vassar, where she went on full scholarship, she often skipped classes and disobeyed rules.  At the same time, she was completely comfortable in her body and her self. An early anecdote recounted by Vincent's sister Norma in Mitford's biography gives you a taste of her style.

"One afternoon we'd gone for a walk up Mount Overlook, and on our return two boys were  following us.  At first we paid no attention to  them.  We'd always liked to walk and there we were two - I daresay pretty - girls striding along enjoying ourselves.  And these two callow youths, calling out to us, trailing behind, but trailing, still, if you follow me, threateningly.  Suddenly Vincent turned around and, crooking her finger, beckoned them.  Well, they came right up pretty quick.  And she said, looking them directly in the eye, 'it is true that we have vaginas and breasts, but we are walking alone together because it pleases us to and that is our right.  We have selected to be alone, and we intend to so remain.' The boys just stood there, bug-eyed, truly stricken. "

Vincent Millay was confident and she was defiant and she was fiercely intelligent, but these qualities didn't come with the hard edge of bitterness that so often accompanies them today.  Perhaps that's why she was able to thrive in the early 1900's.  Everyone fell in love with her - including the rather stodgy Edmond Wilson.  She struck a kind of elfin figure - nonthreatening but highly seductive. She was openly bisexual, liked to swim in the nude and smoked cigarettes in public. During her long marriage,  she conducted several intensely passionate love affairs - one in particular with a much younger man.  Her husband was a Dutch businessman who adored and thoroughly understood her.  Incredibly he kept on writing to her during this period  (while also conducting a few affairs of his own), as she ran off to Paris with poet George Dillon, for whom she had arranged a Guggenheim fellowship.  Her husband's letters are full of love, longing, understanding and patience.

During her heyday,  Millay sold thousands of volumes of poetry, which is extraordinary for a poet of any epoch.  She was also a compelling presence on stage - draped in long velvet robes. She was small with red hair and the power of her voice brought large audiences under her spell. With a quick google search you can find several recordings of her recitations.   But if you're anything like me, you'll be struck immediately by the quaint and dated style of her delivery.  It was the gay nineties  and then the roaring twenties,  so Millay's voice, timbre and delivery brings to mind Glinda the Good Witch in the Wizard of Oz!

We are all products of the age in which we live, of course. Our ideas of beauty, of strength and seduction are informed by the fashion of the day.  But listening to Millay's recitations, I am struck by how quickly the times have moved on - how we women have moved from one phase to another, and are hopefully moving towards a clearer less apologetic sense of womanhood. Vincent Millay's particular brand of femininity was very quickly left behind.

I mean, just take a look at  this photograph - and notice how posed it is - how it conforms to twee notions of Victorian femininity: the hem of her dress caught up in one hand - the coy dip of her body as she peers beyond the gate.

In reading Savage Beauty  you learn what a struggle it was for Millay to come to terms with aging and the loss of sex appeal.  It was hard for her to give up what she'd been and to become a new version of herself.  It's something women often struggle with, it seems. But far worse than this for her,  was how increasingly difficult she found it to write, especially after the war.  She had tried to write polemically and after the war she felt she'd lost her touch.

The end of her life was tragic, but one of the oldest stories in the book.  After a fall, she damaged some nerves in her back - and was prescribed morphine injections.  She then became addicted to morphine and also became a raging alcoholic. Her devoted husband succumbed to the allure of morphine too, and died a year before she did. When she died,  at the age of fifty eight, she was alone in their house. She fell downstairs in her nightgown and broke her neck.

But my goodness - all that passion -  all that life and experience!  I became completely enthralled in reading about her life,  and I've enjoyed going through her sonnets.  In her sonnets, she's always mindful of the temporal nature of love.  She knew it didn't last.  But her sonnets did.  I admire so much the tone she strikes, her clever use of language, her purity and passion, her light and witty touch.  This one is particularly poignant - written to her lover George Dillon, but evidently never sent to him.  It shows her vulnerability, but also her kindness, even as she has the final word.

Well, I have lost you, and I lost you fairly;
In my own way, and with my full consent.
Say what you will, kings in a tumbrel rarely
Went to their deaths more proud than this one went.
Some nights of apprehension and hot weeping
I will confess; but that's permitted me;
Day dried my eyes; I was not one for keeping
Rubbed in a cage a wing that would be free.
If I had loved you less or played you slyly
I might have held you for a summer more,
But at the cost of words I value highly,
And no such summer as the one before.
Should I outlive this anguish - and men do -
I shall have only good to say of you. 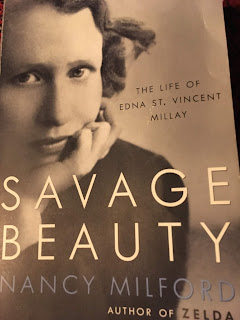 
Posted by byamandaholmes at 5:57 PM No comments:

You can purchase my book at Politics and Prose bookstore, direct from Oak Tree Press, and on Amazon.